We would like to share some photos from Doi Ang Khang in Chiang Mai province for you.

This set of photos has been kept for 5 years already, it can actually said that all seasons are the parts of these photos

Doi Ang Khang is the charming place where really catches your interest to go there.


Importantly, there is Royal Agricultural Station at Doi Ang Khang which is the first royal agricultural project in Thailand.

The background of Royal Agricutural Station at Doi Ang Khang

As His Majesty the King Bhumibol Rama IX and Her Majesty the Queen visited the village in Fang District, Chiang Mai Province and they had also passed Doi Ang Khang area and seen that most of tribal villagers stay in this area. The villagers grew opium as their main occupation but they still faced with poverty. Furthermore, deforestation was the main issue in this area which impacted and destroyed to natural diversity

The King Rama IX said that the temperature is constantly cold in this area, then opium is chosen to be grown in this area, opium provides the same revenue as local fruits (peach). He also noticed that there is the Agricultural station for growing fruits in cold area. Indeed, there was also an experiment in agricultural activity such as grafting.

He donated his money for THB 1500 to buy some pieces of land from tribal villagers at Doi Ang Khang. Later, he settled Royal project and established Royal Agricultural Station in 1969. He has assigned M.C. (Royal Male Relative) Bheesadech Rutchanee to be the chairman of this project. The main objective is to do the experiment for growing plants in the cold area such as fruit, flower etc. This experiment will be used as the example for the tribal farmers to follow. His Majesty the King Rama IX has given this place as "Royal Agricultural Station at "Doi Ang Khang .


Thank you for the information from http://www.angkhangstation.com

Since we have got many photos for this trip, we are afraid that we could not post all photos in this review. If, you would like to see more photos regarding this trip, please feel free to visit below link;

There are 2 possible ways to get to Doi Ang Khang.

The first way is the popular one, which is to drive straight on the main road Chaiprakarn - Fang. If, your car is not speedy car, we recommend you park car at the entrance and take the local bus instead. The second way is to drive straight to Chiang Dao district, and continue driving along the way to Ban Arunothai. This way is not too slope but it is quite narrow . We personally like this way because the view is so nice.


Once we arrive at Doi Ang Khang, Operations Base will be the first place where we will see. This place is also well known as the view point of Doi Ang Khang. Furthermore, we can also enjoy seeing the foggy curtain in rainy season and winter season. The best time for seeing foggy curtain will be during October and November. Below photos are taken in Operations Base and nearby area.

There are Palong tribes who stay in Nor Lae village on Doi Ang Khang. The view is so stunning over here. If, it rains, we will have the chance to see foggy curtain. Well, it is also the place where connect both countries; Thailand and Myanmar. The fence is built to distinguish the landscape throughout the boundary. We are able to take the photo of sun light in the morning and evening.

There is one activity that you should not miss, it is tiger hunting. Once we mention about " Tiger" some of you might imagine that how fierce we are but it is not the real tiger. It is actually the name of flower which is blossomed one a year, it is " Wild Himalayan Cherry flower" or Nang Phaya Sua(Tiger) Krong in Thai.


Doi Ang Khang is also named as the most romantic place in winter time because Wild Himalayan Cherry flower will be blossomed, so we will see pink flowers throughout Doi Ang Khang. Indeed, we can also see the real Sakura flower in Royal Agricultural Station.


It is time to discover how beautiful Wild Himalayan Cherry flower is.

There is also another popular corner where many tourists always come to take the photos, it is Chinese plum garden

This garden is inside Royal Agricultural Station, the plum flower will be blossomed in the winter. It is very beautiful in white color. There is no doubt why it has been chosen as the location for many movies' scenes.

Below photo is the ambience inside Royal Agricultural Station. We can chill out at Ang Khang Club where we can buy food and beverage over here. All product in Ang Khang Club are the product from Royal Agricultural project. Nevertheless, there is also a lovely corner for taking photos. Apart from the place for chilling out, there is also the accommodation for the tourists to stay as well.

Doi Ang Khang is also the place for watching birds, there are various types of bird both local birds and migrated birds. Many Thai tourists and foreign tourists come to Doi Ang Khang for this activity. We have taken some photos as per below.

Tea plantation 2000 is also the place where you should not miss. Even though, it is not the big plantation but it is very beautiful.

You will enjoy seeing the foggy curtain in rainy season and winter season, it is very beautiful once it is reflected with sun light. It is even amazing and spectacular once some dew are left on tea leaves and grass.

We would like all tourists who come to visit Ang Khang to not come only for traveling but we would like they come and impress with the project that our King has created for Thai people.

After visiting Doi Ang Khang, we would like all tourist go back home with happy heart and homeland loving.

We hope that you will be with all photos that we have posted. Thank you very much for your attention and comments. 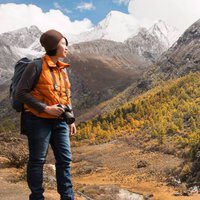