With a strong desire to visit Georgia and the very expensive plane ticket (for people like me), the round-trip ticket is about 18,000-20,000 THB per person, I chose Turkish Airlines because it is an airline of Turkey and gives a free Istanbul day tour. Besides, this country also offers free visa for Thai citizens.

We traveled for 15 days with a budget of 25,000 THB each to 4 countries, namely Georgia, Azerbaijani, Armenia, and Turkey. In the following, I'll let you guys know briefly of where we had been to in these 15 days.

We arrived in Istanbul around 5 p.m. Turkey time. The flight took about 10 hours, serving 2 rounds of food. The full review of food and beverages on board will be provided later. Since we reached there quite late, we just chilled around and didn't go out to downtown Istanbul. Tonight, we will also fly to Tbilisi, Georgia at 11 p.m.

After arriving at the airport, we exchanged money for about 4,000 THB. We didn't buy the SIM card yet as we planned to buy it in the city. After walking out of the airport, we turned right to find a bus stop. We took bus no. 37 and got off at the end of the line at the train station (of which it will become the main center of this trip as we will keep on coming back here very often).

We bought a sleeper train to Zugdidi at 9.45 p.m. Actually, there're two times but we chose this train so that we can sleep since we will need to continue taking the bus to Mestia afterwards. After buying the train ticket, we took the taxi to the hotel to rest and coming out for a walk in the afternoon.

The Bridge of Peace

We were up on the train at 9 p.m. Please prepare water and food well as they won't be selling on the train.

We reached the Zugdidi railway station at about 5 a.m. Then, there're people asking if we wanted to go to Mesia, just follow them to the van.

View from the room

Yesterday while roaming in the city, we met with a person asking if tomorrow we will go to Tetnulti. That we were looking for a tour and it is a skiing teacher who was asking, we decided to ski at Tetnulti ski lift. So lucky! This one-on-one teaching fee is 2,000 THB for 5 hours and the equipment rental fee is 250 THB.

Here is my personal coach and the other one is a driver, feel free to leave anything with him.

We learned to ski for 4 hours and another hour was for going up to the top and down. The view here was so very beautiful. Too bad that we only focused on learning to ski and thus didn't take any beautiful view from up here.

A ticket to the top

The above view was so very breathtaking. Once in a lifetime, we must come.

After skiing, we came back to buy the ticket back to Tbilisi. There's only one van in the morning, at 8 a.m.

It was quite a long distance drive, so today we basically spent time by only sitting in the car.

View on the way back

The van came to the last stop at this train station. We then walked to buy a sleeper train ticket to Baku, Azerbaijan. To enter this country, we needed to apply online for an e-visa first. We could easily apply online from Thailand. The visa fee is 800 THB and valid for 3 months.

We took the train at about 9 p.m. again.

Today is a day of walking around Baku, Azerbaijan all day long.

We then went to buy the train ticket back to Tbilisi at 11 p.m. before coming back downtown to enjoy the sunset and the night light at the viewpoint. We wanted to watch the fire at Fame Tower. I think you guys will love it too just as we did.

Farewell Azerbaijan, if chances allow, we will meet again. We took the sleeper train back to Tbilisi at 11 p.m. and reached there at 10 a.m.

We arrived at Tbilisi at about noon due to the check of Covid (other people) on the train for a long time.

Roaming in the city and looking for a rental car

Then we got a Toyota Prius from the Cars4rent company. Initially, we were thinking to rent for 7 days as we planned to drive into Armenia. But we asked to know that we won't be able to drive across Armenia if we hadn't prepared the document in advance. Therefore, we decided to rent only 3 days, 1,200 THB a day. No need to deposit anything, just use an international driving license.

Actually, according to the plan, we would go to Kazbegi and sleep there.

But due to a snow slide and the road was closed, we were stuck at Gudauri. And that the road will reopen again at 9 p.m., we decided to stay at Gudauri.

This morning we woke up late at 9 a.m. After leaving the hotel, we drove up to Kazbegi. Today there's no police checkpoint, probably the road was all cleared.

After taking pictures for a good quality time, we continued to Kazbegi. After a while, we were followed by a police car and they told us that the road was closed ahead. So we had to go back to sleep in Gudauri. We then decided to go up to enjoy the view at Gudauri ski resort.

Is it heaven? It's so super white and clean.

We decided not to go to Kazbegi anymore because we were afraid to get caught in a snowslide. If the road were to close, we won't be able to return the car on time. We then decided to rent ski equipment and enjoy it tomorrow instead.

I'm so into skiing that I went to buy my own set of clothing and gloves. The equipment rental fee is around 400 THB, including ski shoes, hats, and glasses.

We skied here all day.

We played at an easy location. There was a place to grab and drag us upwards, not very high (behind that, see?)

We skied from 10 a.m. to 3 p.m. and then returned the equipment. We decided to drive back to Tbilisi to sleep there because it's not very far.

Stop for the sunset at Jvarri Monastery of Mtskheta

We woke up to return the rented car. Then we went to buy a sleeper train ticket to Armenia. After that,  we went for a chill walk.

The Chronicle of Georgia

We came back to rest and pack.

The viewpoint around the Chronicle of Georgia

We took a sleeper train to Armenia. To enter Armenia, there's no need to apply for a visa online. It can be done at the crossing border. The staff will call us to get a visa. The cost of the visa is about 200 THB, very cheap.

Here we are, Armenia, the land of Noah.

We walked around to look for a car rental shop. Here, renting a car requires a deposit of around 5-7,000 THB. So we decided not to rent it but buy a day tour instead which has a lot of options. You can negotiate the price with the car you want to hire which will have different locations attached to their cars.

Today we bought a Day Tour to visit the lake and the ancient church.

The first destination is a ski resort near Savan Lake.

Today is a free day with no plan except buying the train ticket back to Tbilisi.

Vernissage is a market selling handicrafts, souvenirs, and other eye-catching statues. If you follow this review until here, please tell me, I want to ask you to buy something from here and I will pay for it.

Taking the train back to Tbilisi

We left our hotel to the airport at 2 a.m. as our flight from Tbilisi departed for Istanbul at 5.30 a.m.

It was so unfortunate that it rained all day and we only had today for this city.

We bought a ticket to downtown and get off at Blue mosque.

The traffic was so bad. It rained. Car crashed.

Here we are, Blue Mosque. But wait, this isn't !!!! We got off at the wrong stop. We supposed to get off at the last stop but we followed everyone else as we thought it's the right mosque. But no, here is the New Mosque that hasn't finished construction yet.

Spices market, so much

Taking the train to Blue Mosque

We took a tour bus back to the airport in which the bus station is near the Blue Mosque.

Thank you all very much for reading until the end... I hope this blog is more or less useful for you guys.

See you again on our next trip. 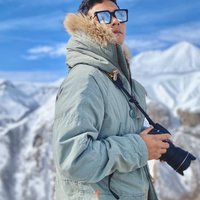