Previously of ROMANIA #4 : Sighisoara https://th.readme.me/p/5240 Our destination today is Cluj Napoca and stop by the amusement park "Salina Turda". We departure from Sighisoara around 7.00 am. and today we contact the hotel to help find a car rental so we do not have to carry our luggage 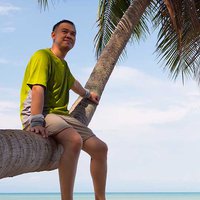 Our destination today is Cluj Napoca and stop by the amusement park "Salina Turda".

We departure from Sighisoara around 7.00 am. and today we contact the hotel to help find a car rental so we do not have to carry our luggage to the parking.

From Sighisoara to Salina Turda is about 2 hrs. with a distance of 155 KM.

Many people might curious that why do I come a long way here for just the amusement park?_?

Because it is not just an amusement park, Salina Turda has something that makes it different from others and seems to be the only one in the world. (I would say)

Salina Turda is located on an open ground area. There are many souvenir shops in front of the park.

Salina Turda is an amusement park that located 120 meters underground in the old salt mine.

Buy a ticket first... It is 20 LEI for entrance ticket.

Map of the park....You still might not have any ideas how is it going to be fun>>>>

We walk through the tunnel.

The bricks wall changes to black like waves and the temperature is dropped unexpectedly.

Now the black wall changes to white and knobby. After tasting, this white wall is very salty.

After walking for a while, we arrive to the intersection that can direct us to many rooms such as the exhibition that shown all equipment that use in the salt mine.

Next room looks like a church with the sculpture of JESUS CHRIST.

Now we walk on the pathway that seems very dangerous, it likes a balcony on the cave. However, there is a net below to prevent anything to drop down. But it does not help if someone falls down. So we need to be very careful while walking.

There are Boling, Mini Golf, Slider and Table Tennis down there>>>

To go down, we can walk down by stairs or by elevator

We decide to walk so that we can enjoy the atmosphere.

Salina Turda is the amusement park that builds in the oldest salt mine in the world. There is the history since World War II, this mine was built to make salt and they continued digging down so it became very big. They stopped digging in 1932 until World War TT so the mine was used as the medical center and asylum.

After the World War II, the mine was abandoned for many years. The government changes the mine to Salt Museum and develops until becomes an underground amusement park. The park also gets the award of the most beautiful place underground in the world.

There is stand to see the shows as well.

The highlight is at the plaything yard where you will see the Ferris wheel which I think it is really well matched with the place.

We still can some salts that grow and drop down from the wall and celling which is also very amazing.

Another highlight is the lake that people can kayak around the lake. It like we are in the space.

We have to go down again to the lake. There is a bridge to cross to the island in the middle of the lake.

The island in the lake

The big whole at the wall is the plaything yard.

The wall a pattern looks like marble pattern which is very beautiful.

From the lake, we design to take the elevator up so that we can try both ways.

Before leaving, there is many exhibition room that we can stop by until the exit.

Crivac room is a room in octagon, there is base that was built in 1881 to hold the salt stone layer.

The platten of salt

The tunnel to the exit

There are 2 exits which is located on the opposite side so we have to remember where we get in otherwise we have to walk a long way to the other side.

The weather down there is quite cold so do not forget to prepare your jacket. You have to buy a separate ticket if you would like to play and free for using elevator.

You plan to visit Cluj Napoca, you should not miss this amusement park. We suggest you to come early because there will be a lot of people in a late morning. The park opens 09.00 – 18.00 hrs. I guarantee you will not be disappointed.

Goodbye with a city photo^^