Previously on From Bangkok to Mandalay, we are now traveling to Pyin Oo Lwin and Hsipa to hunt the Light of Shan through the historical railway line of Myanmar.

We hire a private transfer from Mandalay to Pyin Oo Lwin departing in the afternoon and arrive in Pyin Oo Lwin in the early evening. Then we start to look for a place to stay near the train station. We don't have much time here so we can only have a dinner and stay for one night. For the train ticket to Hsipaw, we get help from the hotel. The ticket costs 1,100 Burmese Kyat (MMK) which is about 30 THB and our train will depart at 8.30 AM. Traveling by train might take time but we intend to do this as the train will take us through nature and numbers of cities . We can see how locals live their life as well. The highlight can't be anything but Gokteik, the railway bridge that is long and the oldest in Myanmar. Gokteik is also the highest railway bridge in ASEAN (it is also a filming location of From Bangkok to Mandalay, I am still into it until now eiei).

We have got the shuttle from the hotel dropping us off at the train station. Oh! I forget to tell you the name of our hotel. It is called, "HOTEL 99." You can contact the hotel via this email, [email protected] if you are interested. They can speak English well and their service is great.

We are ready to rock the day.

Everything looks pretty much similar to Thailand. Eiei

We have brought some candies and lollipops along so we can give them to those children we meet.

We have got a lot of photos before the train departs. Eiei

We don't hesitate to walk through the train after it departed from the station.

There are vendors selling snacks and drinks on the train. If this were Thailand, there would be sticky rice and grilled chicken.

He looks so relaxing as if this was his home.

The train stops in different stations and once we have got time, we get off the train and greet the locals.

This railway line takes you super close to the nature. ^_^ The train is like a part of the nature. hahaha+

And we have finally approached the highlight of this train trip, Gokteik, the long and the oldest railway bridge in Myanmar. It is 650-meter long built in 1903.

It is a-must spot for photo shooting.

We are very excited.

The view down below

Valley, stream, and a deep chasm

It takes us almost 7 hours to arrive in Hsipaw.

Let's take another welfie before getting off the train because we will take a bus on our way back instead of the train!

We didn't reserve a place to stay in advance but we have heard that there is a hotel recommended by many travel bloggers. It is called, "Mr. Charles Hotel." We get off the train and see the staff from Mr. Charles Hotel holding a hotel's sign picking up their guests as well as getting new ones. We don't hesitate to ask whether there are still rooms available or not. Luckily that there are so we will stay with them for two nights to explore Hsipaw. The hotel also has a free shuttle picking their guests up from the train station.

We checked in into the hotel and start to wander around right away.

We are looking for something to eat as well.

Then we have one whole day here in Hsipaw so we rent a motorcycle. The rental fee is 10,000 MMK or around 300 THB per day. The motorcycle is ready and the map is in hands so let's go to explore the city! We are not afraid of getting lost. haha

The local foods are not bad. They taste pretty similar to Thai foods.

Hsipaw, Shan state is the last city in Myanmar with sovereign monarch. Thebaw or Theebaw was the last king of the Konbaung Dynasty of Myanmar and also the last Burmese sovereign in the country's history. He was exiled to Ratnagiri, India after being forced to abdicate the throne when the Third Anglo-Burmese War ended.

Hsipaw is also well-known for its love story of Prince of Shan, Satkyan Sang and his Australian wife. The story has been told in the book named, "Twilight Over Burma : My Life as a Shan Princess." Khun Mananya has translated this book into Thai and named it, "The End of Shan's Light" (You can find this book in a bookstore or look for its movie. Even though this movie is banned in Thailand, it is not easy to find it online.)

We have got a chance to visit Shan Palace where the love story of Prince Satkyan Sang and his Australian wife continued after they met each other in England when the prince went there for his studies. We are also very lucky to meet Chao Sangfon who is a niece in law of Prince Satkyan Sang. She is the one who looks after Shan Palace nowadays. Chao Sangfon is working in welcoming all visitors as well as telling the story of the palace. The first sentence we heard from her is, "Where are you from?" in British accent. She is very friendly with genuine smile.

This hall was built for Prince Satkyan Sang to pray and work on his meditation.

Last but not least, you shouldn't miss to go up to Sunset Hill for the sunset. It is reachable by car and motorcycle. Sunset Hill also offers a panoramic view of Hsipaw. I think it is similar to the viewpoint at Wat Phra That Mae Yen in Pai since it is offering kind of the same atmosphere with some light fog.

We also make new friends. They are Tai who can speak Thai fluently. They heard us speaking in Thai so they approach us to take a photo with immediately. Eiei

The sun is gone so this is the end of Shan's light.

I feel like Hsipaw is about to grow as a tourist destination. Old wooden houses start to turn into the modern ones while some are about to turn into restaurants. Therefore, you should come while the true local culture is still there before it is too late.


Thank you for your kind support and please stay tuned for the upcoming trip! It is an amazing one, I am telling you. 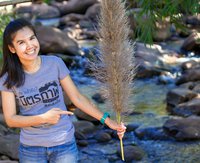