Travel in Taipei with (sky) Train

A : Living cost and exchange rate is close to THB making it easy to calculate. Also, it is near and has nice weather. It also has several attractions, shopping sites, tasty food, good-looking guys plus free visa ... OMG!

In previous TITF (Thailand International Travel Fair), I found traveling package of China Airline + 3 days 2 nights accommodation together with airport shuttle in only THB7,900. Adding some fees, total cost is THB9,500 plus 1 Day Bus Tour. (well, only full service flight in this price is worth enough.)

Sightseeing is as below.

Flying time is 3.5 hours. Staff is waiting once we arrive.

The bus drops us at New World Hotel in Ximending which is convenient and close to MRT as well as shopping district. At first I plan to use the Bus Tour but it may not my type. So, I ignore it and buy Easy Card instead.

When will we have card like this? T T

The first station is not far from our accommodation. Only one station.

It is an ancient temple where people come to pay respect all day.

How to pay respect

Enter via dragon door (on your right hand side). Incense according to incense burners which there are 7 of them inside.

Start in the middle of the court for Guan Yin. Go little further for Hsing Tian Kong.

Then enter inside. There are 5 burners lining orderly. Start from the right to left.

Highlight is at the last god, Ye Lao or The Old Man from The Moon, which is well known for love. Single person try asking for soulmate. Then take red string from a box inside statue and keep it beside. It is believed that red string will pull that person to meet with soulmate. After finish, exit via left door which is tiger door. (To make it simple, always start from right to left)

I don't strongly believe in this kind of believe. But whether I do it or not??? Of course, haha.

There are priests and general public praying.

PS. The guy wearing suit is mine. Don't touch!!!

Though weather isn't very nice, it is also beautiful in other way.

The third station is Ximen Ding.

I come across this shop and see long queue. Customers buy and eat right away.

It is a thin rice noodle in thick soup, like fish maw in red gravy, but add pork entrails. The price is TWD50. If you are going, please try. Delicious.

The fourth station is Xingtian Temple.

There are lots of people praying inside as usual. This photo is taken after ceremony has done. They sit in front of the temple to rest.

For the fifth station, I'll bring you to suburb heading to the ancient town, Jiufen.

Take MRT Yellow Line or Blue Line to Zhongxiao Fuxing Station, Exit 2. Then take bus no.1061 or 1062. Bus stop is in front of Georg Jansen shop of Sogo. (According to other reviews, location of bus stop keeps changing. This one is update as of 26 April 2017.) Take a bus for hour and a half. For return round, the last bus departs at 19.30hrs.

This street is full of food, products and Thai people. Some food even have Thai description. Sellers can speak Thai too, haha.

This fish ball is delicious.

Are you guys bored with too many food images?

At the end of street is viewpoint.

Most of the houses are built on hill. So, I walk up and down sometimes.

Just n case you want to take photo at this point.

From viewpoint, walk down the stairs and return to the same direction before entering the market. You will see stairs on your right. (Look like above image) Walk up little further and you will see this restaurant. Easy to find.

To go back, wait for the same bus but bus stop is one step on hill. You can look for this temple.

The pavement is quite convenient. Takes around 20 minutes to reach to viewpoint.

For those who want to see Taipei landscape on Taipei 101, get off one station prior.

Weather is nice and cool. If you have time, I recommend to watch night view. It is so beautiful worthwhile with your sweat-drop.

Here's extra site which I don't know its name. However, get off at the same station.

The temple is located out of town but very charming. It's even more beautiful when Cherry blossom blooms. I go during end of April. There is some of it left.

There is a pagoda inside where allows you to see top view.

Take a photo of Cherry bloom before leaving. For return round, cross the road and take same bus. Then continue with train. Actually there is a beach near the station but I didn't go. You can search for more information.

MRT Blue or Yellow Line, Zhongxiao Xinsheng Station, Exit 1 : Go straight for 300m. crossing the junction. It is on your right. Don't worry you'll get lost. Just observe for group of teenagers. That's the place.

The last station I'm going to introduce is the place I like the most in Taipei.

It is a public park called Fu Shui Yang Gongyuan (don't know I pronounce it correctly or not, haha).

There is bicycle for rent.

Bring dogs for a walk.

Actually attractions along MRT are very interesting but we have only 3 days 2 nights. Combining with night life, waking up late and shopping, this is the best we can go. We choose the sites we like and spend time with them.

For returning round, while waiting for HIS staff, we walk around and find something to eat.

Rental bicycles are orderly parked. The city looks nice and clean. I like that every junction has traffic light. Also, locals follow traffic rules.

Price of street food here is similar to Thai, around TWD40-50.

Boiled entrails with millet is tasty. No smell at all.

I have funny story to tell at the end of this review. Without prior research, we don't know "Xiao Long Pao" famous dim sum in Taiwan.

At first we thought it's a steamed dumpling but why so many people eat it, like every table in the restaurant. So, we order.

And we just know the truth while we are waiting for the flight back to Thailand, LOL.

With a concern that we haven't arrived at the land of milk tea, we decide to drink it too, haha. So, may I use this milk tea as the end of review. 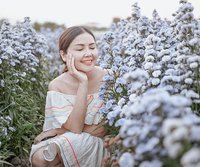