Weekend again and we are exciting for day trip to floating market and Kanchanaburi the province which is full with the sad history from World War II.

We original 7 walkers agreed to visit the floating market name “Thaka” in Samut Songkram province as Yui one of our walkers member was disappointment a little bit with Damnern Saduak Floating market so she wants to visit an authentic floating market. I suggested this one.

We are Yui, Nut and myself meet at Victory Monument at 7 am and the we drove out Bangkok and heading west to Samut Songkram province to visit Thaka Floating Market.

We stopped by at Proto Go which is the avenue with coffee shop, fast food, mini-mart and the most important is the toilet here are very clean.

They provided tissue paper which you can throw in the toilet bowl in every room, the housekeeping standby and make all area clean.

We spent around 20 minutes there and left with my new tumbler from Starbucks coffee shop because I lost the previous one and I always travel with tumbler so it is needs.

We continue to the market and we reached there around 30 minutes later. The road to this market is very nice.

We drove through the coconut and fruit plantations. There are houses of local people living in their fruit farm.

They are farmer and I always jealous their life because they live in very good environment.

We were enjoyed the view along the way. Then Yui have idea to have some shots from this green area (to show to our friend Alem who missed this trip).

Then I gave her nice shot.

And our youngest brother Nut.

We continue to the market and we reached at the right time. There are local shops, floating shops (people selling their goods on the paddle boats).

We started explore the market and also shopping.

We did not have breakfast yet because I want to let them try breakfast at this local market.

And everyone were really enjoyed.

We start with the coconut pancake and pandan leaf custard.

And then our main dishes are noodle.

And omelet with been sprouts and dried shrimps.

Yui got pan fried clams with been sprouts and chili sauce.

We bought everything and walked to the coffee shop which the owner very kind. She allow us to bring food to eat at her shop but we all also order drinks from her.

View from this coffee shop is not high building or the road with bad traffic but what you can see is the canal, coconut trees, local houses and many paddle boats ride along the canal with the goods from their plantation to sell at the market.

This is the local life which very peaceful and simple but everyone happy with what they have and if they have more than enough then they bring to sell.

The prices is very cheap.

We enjoyed our breakfast with local coffee. And then get on the car and continue to Kanchanaburi which take another 2 hours.

The second stop today is KANCHANABURI WAR CEMETERY. After entering the Second World War in December 1941, Japanese forces quickly overran most of South East Asia. In 1942, in order to find a shorter and more secure line of supply between Burma (now Myanmar) and Siam (now Thailand), the Japanese decided to use prisoners and civilian labor to build a single line railway to link existing railheads at Thaobyuzayat in the west and Ban Pong in the east. Two forces, one based in Siam and one in Burma, worked from opposite ends of the line, meeting at Konkuita in October 1943. The project cost the lives of approximately 15,000 prisoners of war and 100,000 civilians as a result of sickness, malnutrition, exhaustion and mistreatment. This cemetery is largest of three on the Burma-Siam, is located near the site of the former “Kanbur” prisoners of War Base Camp through which most prisoners passed on their way to other camps.

The cemetery, designed by Colin St. Clair Oakes, was created after the war by the Army Graves Service who transferred graves into it from camp burial ground and solitary sites all along the southern half of the railway and from other sites in Thailand.

After spent around 15 minutes at the cemetery then we continue to JEATH MUSEUM. The place showing how the prisoners live and what they doing during World War II (they do not allow to take photo inside this museum).

It so sad to see the people got that kind of treatment. But it happened long time and now people become friend and many people from keep visit this place to pay respect to them. So, we just keep these museums and all information to teach our children to love each other.

The long tail boat took us along the river and stop in the middle and the driver explained us for the 3 rivers came from north part of Thailand and another one from Myanmar and another one in Thailand.

So, this area become two colors river (we cannot see it clearly because we were sitting on the long tail boat which we can not stand up and take photos. So, I just got some shots.

The weather today is so good. The boat took us around 15 minutes then we reached to the photo spot and driver stop in the middle of river and let us take good shots of the death railway “Bridge of River Kwai” which is one of the highlight of Kanchanaburi province.

The restaurant which had lunch located close to the bridge but it is not right by the river. However, the Thai food here was so good.

And we finished all.

So, it's time to continue walking to the bridge. This place is just 300 meters away from the bridge.

We walked to the bridge and we were very lucky that the train not arrive yet. So, we have much time to take nice shots.

And my super models were there. Yui always ready to be in the frame.

She can stand anywhere I want.

We walked from one side to another side of the river on the Bridge of River Kwai. The bridge which was built since World War II.

The River Kwai when we look over from the bridge is so nice.

We walked to another side and get on the car. And continue to our last stop (it was 3pm already.) which located 30 minutes from the bridge.

The history of the site goes back to the period between 857 and 1157, a period when the Khmer Kingdom was flourishing. Records show that the town was abandoned until the reign of King Rama I.The name Mueang Sing first showed in the chronicles of the reign of King Rama I (1782-1809), when it was a fortified town protecting the town Kanchanaburi. In the reform of provincial administration at the end of the 19th century its status was reduced from Mueang to Tambon

Four monuments are located inside the area of 736,000 m² enclosed by a laterite wall. The south wall winds along the Khwae Noi river course, while the other three sides are quadratic. The main monument is in the center of the area. Northwest of this are the foundations of a second temple building. The other two monuments are of much smaller scale.

This place is really huge area. After we walked to the temple in the middle. There is a sign with some info “This monument is the heart or soul of Muang Sing Sanctuary. The 4 gates locate in the fortification wall all face the central building. Originally this monument built of laterite blocks was covered with mortar with stucco relieves. When you walk through the main entrance in the East you will see a cross-shaped pavilion. This space was probably used for relaxation purpose and preparing the offerings. Go ahead and you will see a small pool in whi-p people washed their feed before entering the holy place. In the next terrace you can see 4 basins in which people put incense sticks as the smoke can purify body and mind. You then walk to the stairs leading to the gateway. The central space inside was use for ceremonies. On the left-hand site, stand the library where writings and religious objects were kept. The heart of the Prang in which stands the statue of god Buddhisatawa Avalokitesavara is considered as the god’s residence” WOW, look interesting.

After we finished reading the information about this building then we continue walking in. And Yui and Nut got first shot together.

I got many shots without models.

And many shots with models.

I like to visit this kind of the places as it amazing that people can built beautiful buildings, temples since around 2,000 years ago without high technology like present.

We walked around the area and 40 minutes passed very fast. We are not Archaeologist so we know not much about the history about this place but we all love and happy to visit today.

It was 4pm and we have to take around 3 hours drive back to Bangkok. Then we left Kanchanaburi with lots of memories that still keep talking along the way to Bangkok.

Kanchanaburi is not only extreme activities, trekking, rafting but there are many things there either you have one day or 2-3 days you can not cover every places. So, we should go more than one times. I like this province. They have mountains, rivers, waterfalls and more.

Nut who joined trip as the first time said that he never know that outside Bangkok still have lots of amazing places and he confirmed that he will join us in next trip for sure.

But where is the next trip then. It is my job to create a good program to make our weekend become amazing weekend!!!!! 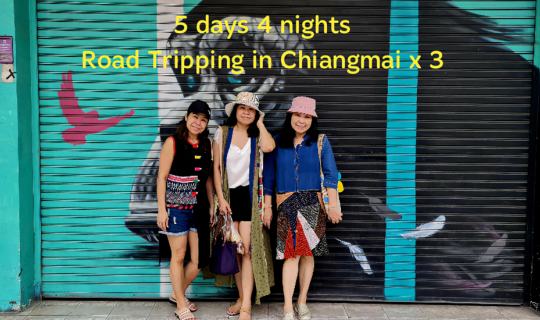 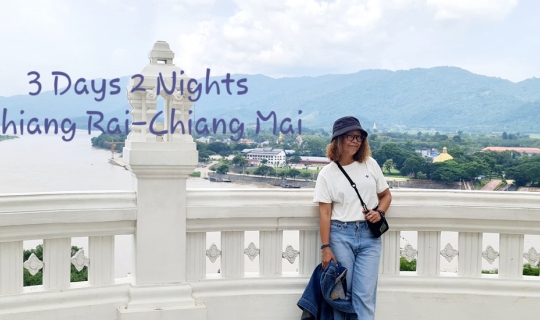 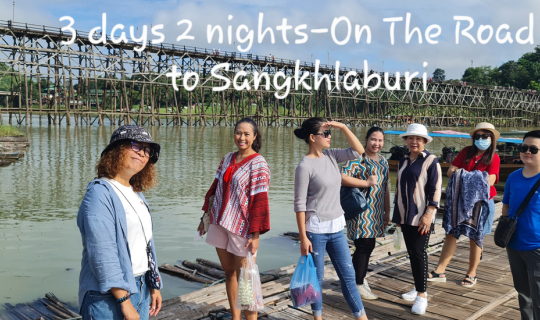 3 Days 2 Nights –On the road to Sangkhla