"Ayutthaya is well know as one of a World Heritage site. And I visit this province many times but this is the first time that I and 4 friends will ride around the historical site by scooter....

We book joined tour with one local tour operator with very reasonable price which included transportation by minivan and tour guide from Bangkok to Ayutthaya. They provide minivan and this trip become private as there were 3 customers cancelled trip on last minutes so there are 5 of us this time.

We arrived to Ayutthaya and prepare to start the trip at 4.30pm. The starting point is at The Three Kings Museum where there are parking area and good place to practice scooter for beginner.

Tour guide prepare scooter, helmet and give us time to practice. Me, Yui and Alem had tried 3 trips by scooter so we are professional now. But Ann and Rut are new so we wait for them to practice.

For me doing the tour by scooter is more convenience than bicycle because it is smaller and more easy to move and stop. Most of all it is very easy even for any one who never try.

4.30pm we all are ready to start the trip. Today our itinerary are ride around Ayutthaya historical side and visit some temples, café, restaurant and see very nice sunset.

City pillar made of Chaiyapruek wood High from the ground, the building on the ground floor goes up to the top of the prang. The top of the pillar is carved into a 7-tiered glass lotus flower and has a model town pillar for people who want to gild, tie silk cloth or offer flowers

We left the City Pillar Shrine and continue to Wat Phra Si Sanphet which is registered to be "World Heritage" by UNESCO.

At present, Ayutthaya people and tourists massively pay homage to their wishes every day. It is also of interest to foreign tourists in terms of beauty and grandeur of Luang Por.

Then we left to next stop "Bueng Phra Ram" which is one of the capabilities of the people of Ayudhya in water management. The city island has a drainage structure, namely various canals, with canals acting to draw water into Rama and other ponds within the island to nourish the people. With the construction of the water gate If the rainy season is reached, the water gates will be opened to allow water to flow through the canals on the island. If the flood season is reached, the water gates will be closed to prevent flooding on the city island. And in the dry season it will store water in the pond for use With 4 canals flowing into the city islands, some canals draw water to nourish the Rama Mi pond to dry up And there are 6 more canals that drain water from the Muang Island into the Chao Phraya River in the south

After listen history about Bueng Phra Ram from tour guide then we continue to visit next stop which is one of  "Unseen Thailand".

Wat Maha That.  According to the official Thai history, referring to the investigations of the Royal Chronicles of Ayutthaya by Prince Damrong Rajanubhab, the history of Wat Mahathat starts in 1374 when King Borommaracha I  erected a temple at this place, bearing another name:

"In the Year of the Tiger 736 C.S. Somdet Phra Borommarachathirat and Phra Mahathera Thammakanlayan built the great, glorious, holy, jewelled reliquary (Phra Si Rattana Mahathat) east of the palace (the Royal gable of the lion). He rose 19 wah in height and equipped with a nine-membered tip that is another 3 wah in height."

Unfortunately, we arrived to this temple too late and they closed already so we can get some shots from outside only.

On the way to next temple we stopped by at the street food market to get some drink and snack.

I like fishcake and love to try everywhere. This one is good one, spice and delicious.

Then we continue to another temple "Wat Ratchaburana". Wat Ratchaburana was founded in 1424 by King Borommarachathirat II of the Ayutthaya Kingdom and built on the cremation site of his two elder brothers. The two brothers had fought to their deaths in a duel for the royal succession to their father Intha Racha.

In 1957 the temple's crypt was looted of a large number of Buddha images and gold artifacts. The thieves were later caught, but few of the treasures were recovered. Some that were recovered are now housed in the nearby Chao Sam Phraya Museum. Subsequent excavations of the crypt have uncovered many more rare Buddha images.

This photo took from behind of the temple. Tour guide told us that now the temple did renovation the underground of the pagoda after they found out that there are lots of gold under the pagoda and now those gold moved to keep in the museum so they open for tourist to visit during day time. But we are too late so we can stand only outside.

Next stop is very happy place for Ann and Ruj. It is Busaba Cafe one of the popular cafe in Ayutthaya.

We order drinks and desserts.

I love this menu very much. They mixed black jelly with coconut ice cream and fresh milk and then top with crispy rice and young coconut slice.

We finished all drink and desert in 30 minutes. And then continue to next stop where we expect to see sunset.

But we were too late again because we were enjoy the scene along the way.

So, we arrived the view point after the sun gone down.

Tour guide told us if we arrive more early we can see the sunset behind the church. And this is the first church in Ayutthaya "St.Joseph's Temple". St. Joseph's Temple Considered the center of the Siamese Christianity in the Ayutthaya period It has a history since the reign of King Narai the Great, when Pierre de la Motte and François Palou made a request to build a church and school. King Narai therefore granted a plot of land for Which later became known in those days as "St. Joseph's Camp" [5] until the second loss of Ayutthaya The church was burned down and all possessions were looted. Archbishop Jean-Batist Palgoa returned to the church again in 1831 and the present church is in Father Perro's time. The ceremonial ceremony was held on November 21, 1883, the church underwent a major restoration in the year 2004 [6] the present church is over 137 years old.

St. Joseph's Temple Received the Outstanding Architectural Conservation Award in 2005 from the Association of Siamese Architects under the Royal Patronage

And this is the last stop for this trip. Ann want to buy the signature dessert from Ayutthaya "sweet cotton" for her family.

Sweet cotton is the most popular dessert in Ayutthaya. Tour guide told us that the legend of this dessert is just a man who originally in Ayutthaya but moved to Pattaya for work with Indian boss. His job is doing roti and he found out later that if we put sweet cotton and wrap with roti then we can get very delicious dessert. So, he try to make it for sell till now there are many shops selling this dessert and it become the signature dessert of the province.

Some shop put it on top of ice cream or bakery menu to get new taste.

We finally complete the trip to Ayutthaya by scooter. All are happy with this new experience and enjoy history and beautiful view along the way. Now we are planning to next trip by scooter again but may be in Bangkok as there are many street in old quarter which we should explore.

The tour operator and tour guide are amazing arranged this trip with safety and friendly arrangement. 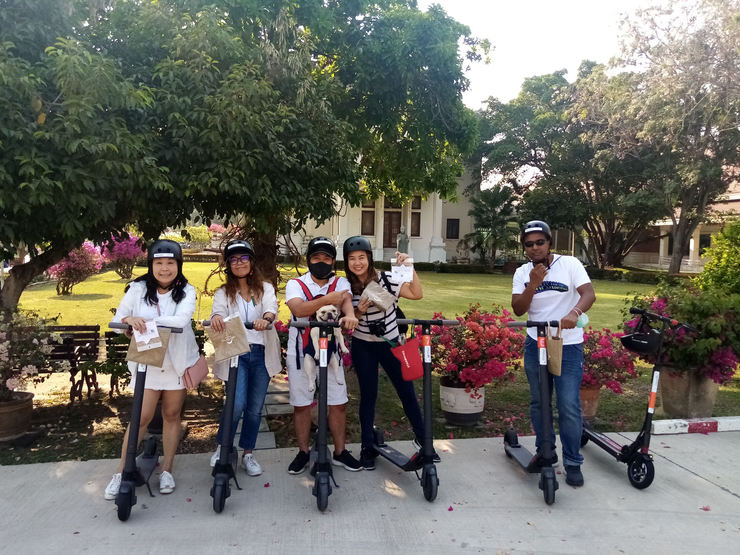 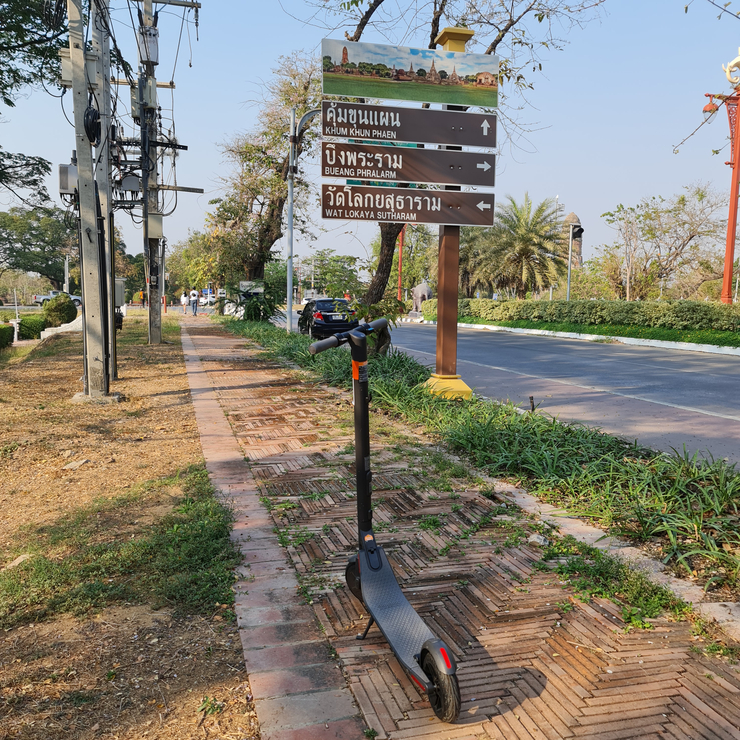 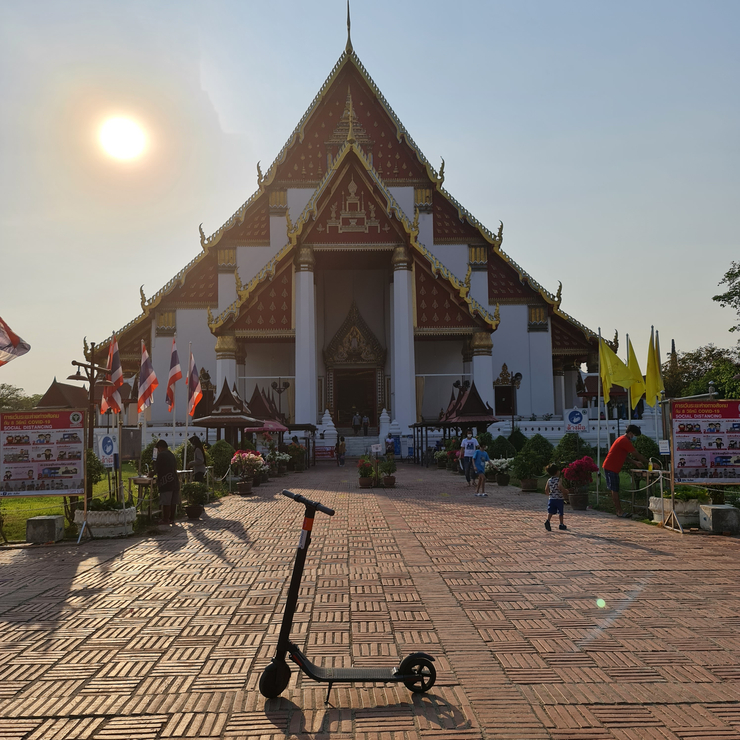 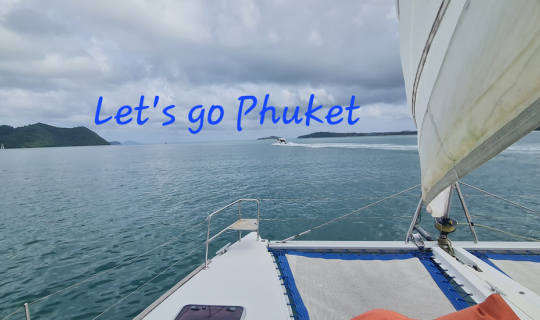 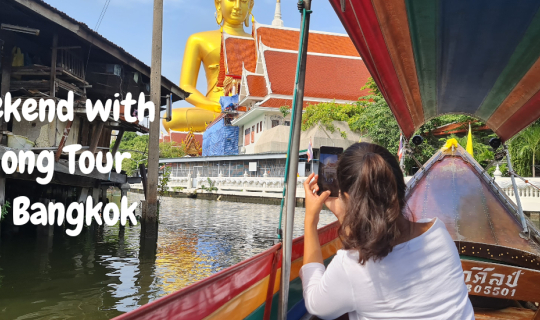 Weekend with Klong Tour in Bangkok 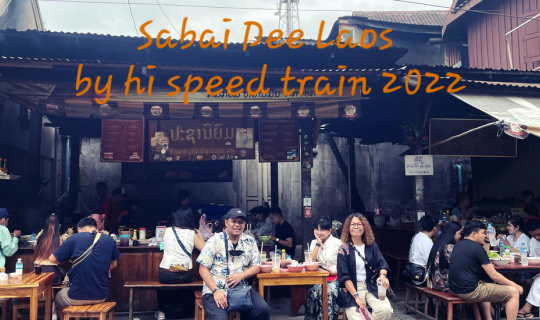