Whenever we have a day off even it is just one day, we always plan to travel outside London. There is one guy who is the photographer and three girls traveling on this trip. After discussing where we shall go, we have ended up with Cambridge where we haven't been. Cambridge is a must-visit town where we should go and visit for once... Cambridge is the second oldest university city in England (after Oxford) and the fourth one in the world. It is about 80 kilometers northeast of London. University of Cambridge has 31 colleges. The collegiate system at Cambridge is similar to the house system used in the Harry Potter series.

We will travel to Cambridge with the coach service operated by National Express from London. We have reserved the ticket and completed the payment through this website www.nationalexpress.com in advance. We need to transfer to another coach as well at Stansted Airport Coach Transfer which is like half way to Cambridge. The total travel time is around 3 hours including the transfer. We are lucky that the weather in Cambridge is very nice when we arrive. We are ready to walk through this huge grass field to the town... let's go!!!

This is a small sign in front of the church.

On the opposite site of St Bene't' s Church is one of the larger pubs in Cambridge called "The Eagle". This pub has been opened since 1667. What is interesting about this place is that the wall and the ceiling are full with the written names of airmen since World War II. Another interesting story is that The Eagle is actually a place where Francis Crick discovered the structure of the DNA molecule. In other words, The Eagle is comparable as a birthplace of DNA. The pub has also created a special blend of drink under the name of "Eagle's DNA".

Moreover, there is an attic room in the building where an old lady was burnt to death due to a bad fire. The window of this attic room has been kept opened since then. Because if not, the locals around the area would hear mysterious voice and it is believed to be the voice of that lady who was unable to escape from the building!!

We are actually the only table here at The Eagle during this time. The weather continues to be very nice so we think it is better to sit outside. The ambiance is pretty good but I can't help but feel scared a bit after looking at that long story window of the attic room from down here. >< You can see that room obviously because it is the only one with the window opened.

We arrive in the morning so we order full English Breakfast. Wow! It looks so yummy and there is everything according to English Breakfast style. It is actually the best breakfast I have so far after coming to study here in England (honestly) 😅 We also have a chance to try Black Pudding (a type of blood sausage in black color) which we have never seen before. 😋

We are ready to explore the town further after the breakfast. We have seen numbers of sundials along the way as well.

And we are now at King's College, one of the most famous colleges in the University of Cambridge.

This is in front of King's College Chapel.

One activity you must not miss when in Cambridge is the Punting Tour. It is a tour through Cambridge on the River Cam. Some students from the University of Cambridge also work as the punters for the Punting Tour. Well, we have done some research before coming here and we heard that we can bargain the price. We don't hesitate to try to bargain and it works... The guy in a hat in the photo below is actually the one who comes and offers us the Punting Tour. The punter generally propels the punt by pushing against the riverbed with a pole. After boarding into the punt... we are approaching Mathematics Bridge that bridges the River Cam firstly. It is the most famous bridge in Cambridge actually. A popular fable is that the bridge was designed by Sir Isaac Newton without the use of nuts or bolts. Various stories relate how at some point in the past scientists attempted to take the bridge apart to see how it was built up but were unable to put it back together, and were obliged to resort to adding nuts and bolts... No wonder why we see a lot of nuts and bolts!!

The next landmark is the Bridge of Sighs. It was built in 1831 and crosses the River Cam between the college's Third Court and New Court. This Bridge of Sighs has the same name and looks similar to other two bridges in Venice, and Oxford. Therefore, there are three Bridge of Sighs in the world that look alike.

After the Punting Tour, we are here at Benet's Cafe for some homemade ice cream. The cafe is on the opposite site of King's College Chapel.

Then we continue the sightseeing tour through the town on hop-on hop-off bus. I guess it is the best way to see everything in the town in one day. The upper level of the bus is open-air. You will also get a disposable audio device for commentary along the way. You can even get off the bus at the certain tourist spot that you would like to see it more closely before catching the next bus and continuing the tour.

There is no one on this hop on hop off bus again today... It is truly our day. 😂 The bus not only covers the main tourist attractions in the town but also the suburban area where there are cemetery, colleges, and more churches. This is totally worth it. 😒

The sightseeing tour has ended and it is time for us to walk back to get the coach at where we were dropped off earlier. It is nice to get some warm sunlight while waiting for our coach. Our coach operated by National Express, the white one over there... And our relaxing one-day trip in Cambridge ends here. 😁

P.S. One thing we miss is that we couldn't find the apple tree in Trinity College that Sir Isaac Newton discovered the theory of gravitation. T_T

You can go and chitchat with us here: https://www.facebook.com/Mytravelholicdiary/ 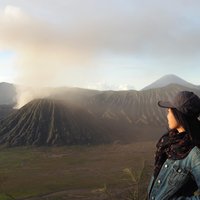 Latest / by My Travelholic Diary Searching for Street Art and Wandering along the Heritage Trail @ Ipoh, Malaysia