It is a short trip to Phatthalung....Slow Life and stop by to experience local lifestyle at Pakpra Canal # Ban Rimlay Pakpra and sipping coffee while enjoying the mountain called Khao Ok Thalu at Kanam Coffee...

Hello all the travelers, today I've got a chance to write a review. I'd like to introduce a small but charming province to you guys, it still has many attractions waiting to be discovered, just like I did. Ok, so this past weekends I attended my friend's wedding at Songkhla Province and then I thought about spend a night at Phatthalung as it's located along the way back to Phuket. I've read lots of reviews about it as Phatthalung is in a great attention these days. Let's go see my short trip together......

Before reaching Pakpra, we must go pass downtown Phatthalung and this coffee shop is recommended. I also stop by every time I'm in town. Kanam Coffee is located on Manora Road (bypass) in downtown Phatthalung. This shop has its identity of decorating the shop with the nature.

"Kanam" is a Southern dialect, referring to a small hut. Let's explore around while waiting for coffee.

Here is the atmosphere of the fields and Khao Ok Thalu, the iconic symbol of Phatthalung.

Now, my coffee is served with a yummy coconut cake.

After enjoying the inside atmosphere, we could also go out to capture more shots.

Kanam Coffee provides lots of seats for customers both outdoor and indoor.

After enjoying the nature while sipping coffee and eating delicious coconut cake, it's time to move to our hotel. This time we are going to stay at Ban Rimlay Pakpra. It's said that the sunrise here is very beautiful but I'm not sure if we will have a chance to see it as it's the rainy season here.

Ban Rimlay Pakpra is located near Pakpra Canal which is about 30 minutes away from the city. It's not so far from Chaloem Phrakiat 80 Phansa Bridge (or as we know as Ekachai Bridge).

Now, we arrive at Ban Rimlay Slow Life Resort. It is located near Pakpra Canal which leads out to Talay Noi. People here live a simply life where they are fishing for a living using local wisdom of 'Yo'.

While walking to our room, I notice that the rooms here are lifted up, it would be called villa in Phuket.

It's so beautiful and extremely natural.

Here is our room. We got the first front room which is right next to Pakpra Canal.

The bed is quite big, the room is beautifully and luxuriously decorated.

After seeing the room, now it's time to explore outside. We reach here when it's almost dark. Once stepping out, we see lots of trees, it's very shady. This is "Luk Wa". I think it's right. I haven't seen it for a long time. I remembered loved eating it when I was a child. We can eat it when it turns black, now it's still red so we can't eat yet.

Here is the view in front of the rooms with several seats. It must be the dining tables for customers.

Ban Rimlay Pakpra at night is turning the lights on which makes it look very beautiful. This makes the atmosphere even greater. It's also very peaceful. It's an ideal place for those who truly seek for relaxation and escaping from the chaotic city. It's like we could once again charge up our energy from here.

We wake up early to wait for the sunrise but the luck is not on our side. The sky is dark from early morning with lots of clouds. Anyhow, we still could see this beautiful view.

Here is "Yo", it's the equipment that local people use to catch fish. It's indeed a simple life.

We come out to receive power from the nature and fully breath in fresh air.

Soon, the rain falls. We quickly go to our room to hide from the rain. We simply lay down inside while listening to the rain.

When the rain stops, the Ban Rimlay Pakpra also put out breakfast for us.

The breakfast at Ban Rimlay Pakpra is looking quite appetizing.

When it's about time to go back, we walk to see the local people lifting up the 'Yo'. It is the gigantic Yo which is the equipment to catch fish made from local wisdom. A person must climb up to the structure of the 'Yo' made from bamboo which hangs to the arms of the 'Yo'. 'Yo' is a rectangle shape fishing equipment which can be lifted up and down in the water to catch fish. 'Yo" at Pakpra Canal is especially huge.

After leaving Ban Rimlay Pakpra, we plan to stop and take photos at Chaloem Phrakiat 80 Phansa Bridge (local people call it Ekachai Bridge). Here is the beginning of a bridge towards Ranot District, Songkhla Province. We could see it a bit far away on the East, it's not so far from Ban Rimlay Pakpra.

Ekachai Bridge or Chaloem Phrakiat 80 Phansa Bridge or Chaloem Phrakiat 80 Phansa on 5 December 2007 Road or Ban Sai Kling-Ban Huapa Road is a bridge/road connecting Kuan Kanun District, Phatthalung Province and Ranot District, Songkhla Province. It is going along Talay Noi and Talay Luang of Songkhla Lake. It is 5,450 km long which is the longest bridge in Thailand replacing Tinsulanond Bridge. This bridge is also a great place to enjoy the beautiful water buffaloes scene.

Finally I'm here on this bridge. Though I've been to Phatthalung several times, this is my first time to visit this bridge.

Here is the end of this short trip of 2 days and 1 night at Phatthlung. I'm very impressed with the beautiful atmosphere at Phatthalung. Actually, it's not only just a bypass city, it has many more attractions waiting to be discovered. It has such an abundant nature that I wish everyone can come and experience it yourself and you will understand **Phatthalung....is good for heart** If you come here, do not forget to sip the coffee while enjoying Khao Ok Thalu at Kanam Coffee and stay at Ban Rimlay Pakpra. I'm sure it's a good choice for those who plan to visit Phathalung.

Thank you for reading until this line. Please accept my apology for any mistakes and I'm more than happy to hear all of your comments. 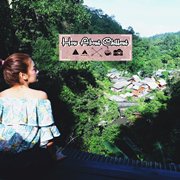