Zurich is Not Swiss Capital

Why is no one want to stay in Zurich even it is a very big city?. People come here for passing to other major city, why???

The capital city of Switzerland is Bern. The formal name of Switzerland is Confoederatio Helvetica or CH. Helvetti is an ancient tribe community that lives here for over 2,000 years ago. The symbol for Helvetti people is Heroines Statue which is located in many important places such as at the main door of Zurich Train Station.

Even it is not a capital city but it is the centre of everything of Switzerland. For example, connecting trains to other places in Europe. It is a beginning point of all tourists to come to travel in Switzerland as there is a national airport here. Moreover, there are many famous cities near by such as Luzern, Davos, Interlaken, etc. that's why sometime people call its "the gateway to Alps".

Switzerland is a small country and it is the centre of Europe. You may take only an hour drive from Zurich to Germany or 4 hours from the northern most to the southern most. If you would like to see old town, beautiful flowers, Zurich is not the place for that because it is a business centre. However, if you spend sometime here, it is also be another good place to chill out and shopping.

Live expenses in Switzerland is quite high so the hotel rate also very high. However, we also can find a cheap one but may be not in a good location as we expect. Zurich has a very good public transportation service, it is very easy to get to the city centre by tram or you can even walk there.

The first hotel is Greulich which is located in the middle of no where but there is bus station in front of the hotel. It is take only 3 minutes to get to the city centre or about 15 mins walks. Everything in the hotel is good except an expensive parking lot. We have booked the room in advance for a very long time so we get it at a cheap price and also promotion for free upgrade.

Another hotel is 25 Hours Zurich West which the same brand with 25 Hours Hotel, Germany. A city tram is passing by the hotel and it takes only 5 minutes to get to the city centre. The hotel is not far from train station but it is quite solitary at night because this area is office building so it is very quiet at night and during public holiday. Everything here is good, such as room, bathroom, etc. but it is quite hard to get there by driving.

We have our place to stay, it is time for the city tour.....

The place for chill out in Zurich is the train station area, where you can find everything here. It is a combination of old town and shopping centre on Banhhoffstrasse. And a cross road is Quaibrucke to Zurich Lake. There are many brandname shops, all the girls may like it. However it is going to be very expensive. Most people like to buy Swiss Chocolate especially Läderach for soouvenir. For food, there are 24hrs. restaurants in the train station where you can stop by at anytime.

We stop by at Starbuck for a cup of coffee. There is an amazing decoration and design especially the one in front of Grossmunster Church.

There are small rivers in many cities of Switzerland which comes from melting snow of Alps. In Zurich also have one which is Limmat River, the end of the river will be at Zurich Lake. We can walk along the river for a city tour.

The building with the green roof is Saint Peter Church which built in 1230 and where they kept the grave of the first governor of Zurich.

Here we are!!! Zurich Lake where everyone comes for chilling out.

Another landmark is Grossmunster Church at Zwingliplatz Square which built in 1519.

Zurich is a city that has high quality of live, people are followed the rules and quite clean city even it is such a busy town. People here love to party as we can see many pubs, bars, and restaurants which also open on Sunday. We can call it "an International City".

Swiss Federal Institute of Technology is located at the highest point of Zurich. It is a very good viewpoint of the city. As it has such a very good public transportation, there is a tram to go up to the university and it has to go through the building like that >>

Zurich is an ancient city since Roman Era as they had found an ancient city under the Zurich Lake. Places to visit in Zurich are churches and buildings beside Limmat River. Grossmunster Church is the symbol of the city where you should not miss (they do not allow to take a photo there).

This is the end of our journey....

Travelbagstrory hopes that this review would be useful for you...

Thank you very much

See you on the next journey^^ 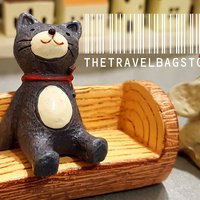