A Journey to Racha Island written by Chris JJ

Hello everyone!!! It's been such a long time haven't written a blog here on Readme.me, and I think today is the time to share my good memory about Racha Island. I used to live in Phuket, Thailand in 2011, working in a tour operator to take tourists from Phuket mainland to travel on Racha Island. Rac

A Journey to Racha Island 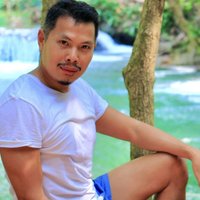 Hello everyone!!! It's been such a long time haven't written a blog here on Readme.me, and I think today is the time to share my good memory about Racha Island.

I used to live in Phuket, Thailand in 2011, working in a tour operator to take tourists from Phuket mainland to travel on Racha Island. Racha Island or Raya Island is located on the south of Phuket, about 20 km. or 40 min. by speedboat from Phuket's mainland. Actually, Racha Island that I mentioned in this blog is Racha Yai Island ("Yai" means big). There is another island called Racha Noi Island ("Noi" means little) as well. However, there's no beach and residential area in Racha Noi Island, so some tour operators only offer diving activities on Racha Noi Island.

You can click on Google map to view the location of Racha Yai Island.

I took a full day tour by speedboat that departs from Chalong Pier at around 9.30 am., and arrived to Racha Island around 10.10 am. Then, we got off from a speedboat at Siam Bay, just in front of Racha Island Resort.

The tour included round-trip land transfer from/to a hotel, speedboat transfer, snorkeling equipments, soft-drinks, lunch, kayak and beach chair rental, and insurance. I can't remember the price, but it should be less than 2,000 THB for sure.

A tour guide let us do activities on beach around 30 min. Then, they would take us to do snorkeling at Kon Kae Bay.

The view is amazing.

In front of us would be Coral Island and Phuket mainland, I believe :)

Let's swim in the sea a little bit, just preparing for snorkeling later.

A guide called us to get on a speedboat for doing snorkeling at Kon Kae Bay, located on the east side of Racha Island.

It was my first time trying snorkeling equipment. I felt a little bit awkward but it was really fun to do so.

There was another resort name Ban Raya nearby this bay.

We took about 30-40 min. snorkeling and swimming around this area.

Unfortunately, I didn't take a camera that could take pictures under water (I don't have one :P )

After snorkeling, a tour guide called us to get on a speed boat for going back to Siam Bay. We had lunch in a restaurant inside Racha Island Resort.

Our lunch was so delicious. It might be because we used much energy during snorkeling and swimming.

Let's explore around the resort!  I walked inside the resort, just wanna check out the accommodation.

I asked a tour guide if we could walk to Patok Bay, since I knew that it had another beautiful beach too. The tour guide told me to walk from the west side of Siam Bay up to a small mountain then walk down to Patok Bay. It took no more than 20 min., he said.

I was impressed from the view in front of me!! This bay had such a beautiful white sandy beach with crystal clear waters.

The resort located just in front of this bay is "The Racha", a 5-star resort on Racha Island.

I walked to the end of the beach as walked back. I didn't swim here since I had to go back to Siam Bay and used equipments (kayak, beach chair, etc.) there for free of charge.

A tour guide called us to get on a speedboat at 3.30 pm. We said goodbye to this island. It was such a fun trip and I enjoyed my time on this island so much.

***Thank you for visiting and reading my blog***